The tawse (also spelt taws, the plural form of the Scots word taw which denotes a long whip) is a strip of leather with one end split into a number of tails. It has historically been a common instrument for corporal punishment in schools in Scotland. In everyday language, Scottish pupils would refer to the tawse as “the school strap” or simply “the belt”. Today, old tawses have become a collector´s item, with some rare and desirable tawses being sold for hundreds of pounds.

In Scotland, the tawse was also used for judicial corporal punishment, although the birch rod was more common in this context. Scottish courts could sentence boys who were older than 14 but younger than 16 to a maximum of 36 strokes on the bare buttocks with an extra-heavy tawse. In 1948, all judicial corporal punishment, including tawsing, was abolished in Scotland. 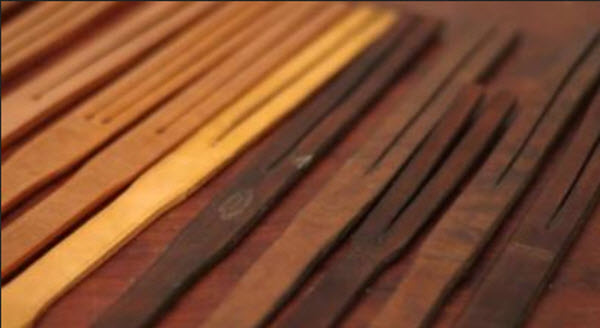 Tawse comes in a variety of designs. The number of tails can vary, and so can the thickness of the leather. In Scotland, it was often the saddle maker who manufactured this type of equipment, since he was skilled in working with leather. A major producer of tawses was the John J. Dick Leather Goods in Lochgelly, Scotland.

Use in state schools in Scotland

Both boys and girls were subjected to the tawse in Scottish state schools, and the tawse was in use in both primary schools and secondary schools. It was used as punishment for trivial offences as well as more serious actions.

Typically, a pupil would be instructed to hold out one hand with the palm facing up, supported by the other hand below. The adult would then strike the palm with the tawse one ore more times.

The striking with the tawse was usually carried out by the class teacher in front of the rest of the class, to serve not just as a punishment for the individual child but also as a deterrent for the other pupils. In some situations, the punishee would instead be sent to another adult, such as a headmaster or deputy headmaster, who could carry out the punishment without other pupils watching.

Use in private schools in Scotland

Use in schools in England

Even though the tawse is strongly associated with Scotland, the practice of using it for corporal punishment in schools is also known from a few locations in England, such as Manchester, Walsall, Newcastle upon Tyne, and Gateshead. Interestingly, quite a few sources from England concerns male students being tawsed on the seat of the trousers, and not on the palm of the hand which was the typical punishment in Scotland.

Outside north-eastern England, most English schools seem to have been more likely to cane students than using the tawse.

By the early 1980s, most Scottish local education authorities had abolished corporal punishment in their schools.

In 1987, legislation banning corporal punishment in all UK state schools came into force.