Caning is a type of corporal punishment where a single cane is used to hit the punishee. A popular material for canes is rattan, a type of climbing palm with a flexible woody stem. There are roughly 600 described species of rattan and they are lianas rather than true trees.

A walking stick, also known as a cane in American English, is usually made from strong wood and much more rigid than a cane created to be used for corporal punishments. 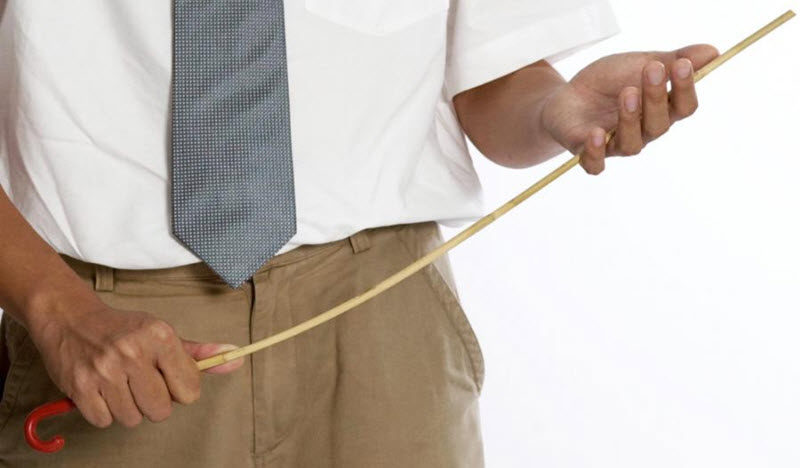 The cane is usually applied to the punishee´s bare or clothed buttocks or the palm of the hand.

Examples of countries and regions where the caning of students used to be common but is no longer permitted are the United Kingdom, Germany, the countries of the former Austrian Empire, and the Scandinavian countries.

Even though caning of students has been outlawed in Britain, it is still legal and practised in quite a few former British colonies, such as Singapore, Malaysia and Zimbabwe.

There is still no nationwide ban against caning students in Australia, but it is banned in state schools in every part of the country except the Australian Capital Territory (ACT). It is still legal in independent schools, but many of them have abandoned the practice on their own accord.

One example of a country where students can still be legally caned with a rattan cane is Singapore. In Singapore, the maximum number of strokes allowed is 24, but it is very unusual for a student to be subjected to such a large number of strokes. A caning of six strokes is much more prevalent, a heritage from when Singapore was a British colony. Singapore is also a country where caning is still permitted in the armed forces and for judicial punishments.

In Malaysia, the caning of girls in school was outlawed by the Education Ordinance of 1957, but caning girls is still fairly common. In November 2007, the National Seminar on Education Regulations (Student Discipline) passed a resolution recommending allowing the caning of female students at school, but at the time of writing, the law has not been changed.

When students are caned in Malay schools, they are usually struck on the palm of the hand or on the buttocks (not naked). This is true for both boys and girls. Striking the student´s arms or thighs is more uncommon, but does occur.

Malay students are caned for both minor and major infractions. Caning can, for instance, be administred because the student got poor grades, was unable to answer a question correctly, arrived late to class, or didn´t bring the right textbook.

In England and Wales, the caning of pupils is strongly associated with the 19th century and later, because prior to that, birching was much more common in schools. (In Scotland, and parts of northern England, the tawse continued to be more common than the cane in the 19th and 20th centuries.)

In England and Wales, the practise of caning became widespread in both private and state schools in the 19th century, and both boys and girls were caned. The main cane of choice was the rattan one, and it was applied to hands, buttocks and/or legs. One of the reasons why caning became popular in the 19th century is probably because the cane could easily deliver painful blows even through clothing. The practice of making a student drop his trousers or hike up her skirt to reveal a bare bottom become rather frowned upon by during the Victorian era.

A student about to be caned on the buttocks in the 19th century would typically be allowed to keep their clothes on, but ordered to either bend over a desk or chair, or bend over and touch their own toes with their hands. Even when administered to a clothed student, the cane would usually leave weals, tenderness and bruises that would last for days after the immediate intense pain had subsided.

In some schools, any teacher could apply the cane, and the punishment could be carried out in front of the other classmates. In other schools, an offending pupil would be sent to the

headmaster´s office where the headmaster would apply the cane.

Many schools adhered to a rule that limited the number of cane strikes to no more than six during a caning session. This was referred to as “six of the best”.

Caning the hand was considered more likely to cause serious injury than caning the buttocks. In 1935, the county court awarded an Exeter schoolboy £1 in damages, plus payment of his medical expenses, when an abscess developed on his hand after being caned by his schoolmaster.