A spanking paddle consists of a handle and a blade and is typically used to strike the buttocks (or, more rarely, the back of the thighs) of a punishee as a form of corporal punishment. This is known as paddling.

Paddling was, and still is, chiefly used in the United States. In other parts of the world, other forms of corporal punishments have been more common, such as caning and birching. It has been theorized that the spanking paddle became widespread in the United States because of its ability to cause intense pain to a slave without doing any long-lasting damage that would decrease the slave´s ability to work. 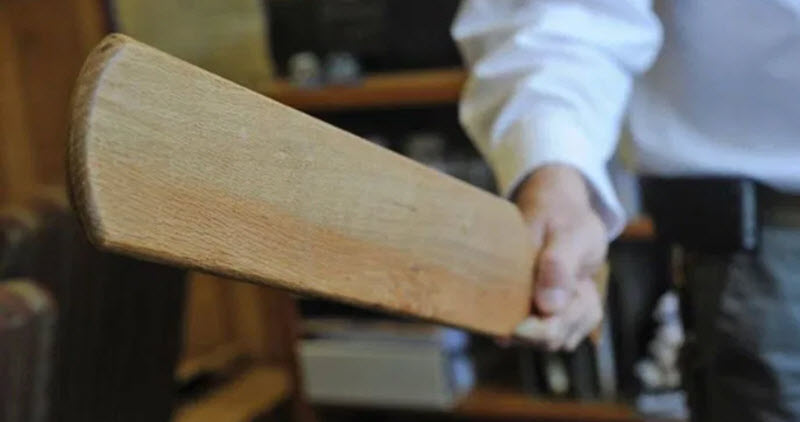 The paddle has two parts: the handle and the blade. It is common for both parts to be made of wood, although some schools use all-plastic paddles instead.

The blade, which is the part that will touch the punishee, is usually 1-3 feet long, 3-4 inches wide and roughly ¼ inch thick.

Some paddles feature drilled air holes. The holes reduce the air drag when the paddle approaches the punishee and makes it easier to administer a more painful strike.

Many of the school districts where paddling is still carried out have enacted stricter rules for paddling in the 21st century, chiefly to decrease the risk of injury and the risk of criminal and civil court cases. Two common requirements are for a professional witness to present and for the paddling session to be comprised of no more than three strikes (also known as swats, licks or pops). Many schools publish these rules in their student handbook.

In the United States, paddling in schools is typically not delivered to bare buttocks or thighs. Instead, the student will remain fully clothed and the strikes are applied onto the student´s trousers, skirt or dress.

In the past, it was not uncommon for schools to allow their staff to administer an unlimited number of strikes, and paddling sessions involving up to 30 strikes did occur, even though they were not the norm. Back then, it was also more common for students to be paddled in the classroom, in front of their classmates, to serve as a warning example to the other students. Some students were even subjected to “hallway paddlings” which could be seen by any student and staff at the school that happened to be around, as well as by other people who were present at the school in that moment, e.g visitors. Today, it has become more common for paddling to be administered without spectators, usually in the principal’s office, and often with just the punishee, the punisher and a professional witness present.