A birch rod, often simply called “birch”, is a bundle of leafless twigs bound together. In many parts of the world, there is a long tradition of using birch rods for corporal punishment of both children and adults. When a birch rod is used for corporal punishment, the rod is typically applied to the buttocks, back or shoulders of the punishee.

It is fairly easy for an adult to place a small child on the knee to apply the birch rod to the child´s buttocks. For older children, it has been more common to order the child to bend over a piece of furniture, such as a chair. 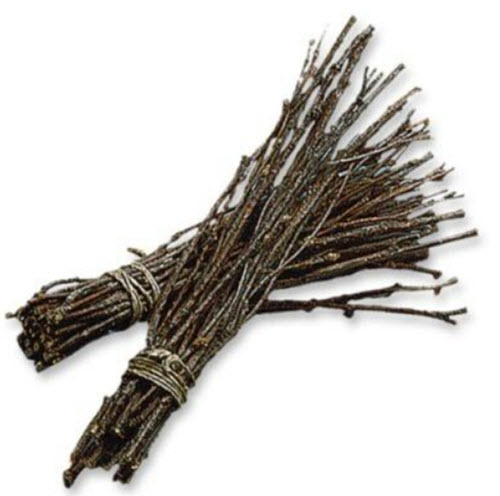 Horsing is a position associated with school birchings on the British Isles, where the punishee is held by the arms over the back of another person (typically another pupil) or on the shoulders of two or more persons.

At Eton College, the punishee was typically forced to kneel on a special wooden block used only for this purpose. This type of block also existed in several other similar educational institutions in England.

In Scotland, the birching table was once fairly common. This table had two holes, into which the punishee´s arms were inserted. The punishee´s feet were then tied into position and a strap were fastened above the waist.

For judicial punishment in Europe, it has been fairly common to tie down the punishee well to prevent resistance and escape attempts. Some prisons and reformatories utilized a contraption known as the birching pony (or donkey).

The term birch rod can be confusing because a birch rod isn´t really a single rod and it isn´t necessarily made from twigs of the birch tree either. Historically and today, twigs from a variety of trees and shrubs are used to make birch rods, depending on local availability and other preferences. Normally, strong and smooth twigs are selected.

When birching was still a judicial punishment on the Isle of Man, four or five hazel twigs comprised the standard birch rod utilized by the judicial system.

The design of the birch rod will affect its impact on the punishee, e.g. the length of the rod, the rod´s weight and the number of twigs included in the rod. Some British institutions had several different birch rod models available and gave each of them a name. There is for instance the Senior Birch used at Dartmoor Prison. It was a 48 inch long birch rod that would weigh around 16 ounces, and it was used to strike males aged 16 and above.

Historical use in the UK

In the 1860s, the Royal Navy stopped using the cat o´nine tails on boys and replaced it with the birch rod, chiefly because the cat had become strongly associated with prisons while the birch rod was something that boys would already be accustomed to from home and school. The Admiralty used

Fairly soon, the British civilian court system followed in tow and stopped using the cat or other whips on boys and young men, opting instead for the more acceptable birch rod. Other males could still get whipped with the cat.

During the first half of the 20th century, birching was typically used as punishment for boys who had committed comparatively insignificant crimes, e.g. petty theft. A special version of the birch rod was used for boys up to 14 in England and Wales, and boys up to 16 in Scotland. This was a fairly small and light birch rod. Also, the birching would not be administered publicly. Instead, a policeman would birch the punishee, either at a room at court immediately after the magistrate’s court hearing or at the police station.

The Isle of Man was the last jurisdiction in Europe to abolish birching as a judicial punishment. As mention above, this form of punishment was abolished in the UK in 1948, but Isle of Man – being a Crown Dependency – has its own legal system and continued to birch offenders until 1976. At the nearby Channel Islands Guernsey and Jersey, teenage boys could be sentenced to birching until the mid-1960s.

Even though birching was once a common judicial punishment, it has largely fallen out of favour around the world. Even in countries where corporal punishments are still legal and common, the use of a whip or cane is much more common than the birch rod.

One notable exception is Trinidad and Tobago, an island country in the Caribbean, where the 1953 Corporal Punishment Act allows the High Court to order males to be either flogged with a cat ´n nine tails or struck with a rod of tamarind, birch or similar. This Act also gives the president the right to approve other instruments for corporal punishment. In Trinidad and Tobago, corporal punishment is only available in conjunction with another punishment, such as prison. Until the year 2000, a person as young as 16 could receive judicial corporal punishment, but since then the lower age limit has been 18, which is the age of legal adulthood.